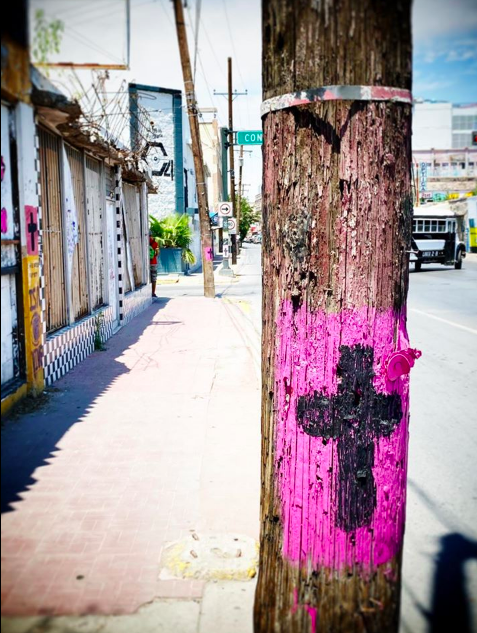 
But each cross represents a life.
Each cross represents the spot where a woman‘s body was found.
“They will often target migrant women,” my friend K told me... probably in an attempt to make me feel safe. “Because unlike you, they can’t be traced - they know no one will be looking for them.”
Many of these women leave their countries of origin in an attempt to find a safer land, but on their journey the dangers only increase.
When they get to the US border, if they’re not granted immediately asylum, they’re given a court date. Often times it’s at least a year away. And if their asylum is denied all together, they are stuck.
Women from Guatemala, Venezuela, or Ecuador have no way to legally work even in Mexico, without a visa, so they’re pushed into other ways of earning the money they need to survive.... to feed their children.
This frequently leads to sex work. To abuse. To the “torture porn” Juarez is becoming famous for. And more times than not, to death... Because in the eyes of their killers these women are nothing more than property to be used and disposed of.
Untraceable.
And this dehumanization spreads. It’s not just migrant women who are property to these predators, it‘s poor Mexican women too, because everyone knows their families don’t have the money necessary to seek justice.
Their value is only contingent on their wealth or documentation - two things so many of these women don’t have - making their lives expendable in the eyes of the killers and the government.
A large cross is on display at the entrance back to the American side of the border. It was originally erected for 8 women who were killed, but has stayed because that was just the beginning.
The black beams rest against a large piece of pink wood. Railroad spikes now surround the cross. Numerous tags are attached to the spikes that flap and twist in the wind. When I first saw the memorial I didn’t give it much thought.
I had no idea what those tags were.
Then K told us they were the toe tags of the murdered women. A group of activists requests them from the morgues and then they hang them on the spikes.
Far too many read, “No Identificada.”
Untraceable.
When a murderer is caught, the woman’s tag is removed.
“Justicia.”
But far too many tags will remain forever on that cross... the only trace left of so many women’s stolen lives.
Posted by Destiny at 6:59 PM

Email ThisBlogThis!Share to TwitterShare to FacebookShare to Pinterest
Labels: CampaignRelief