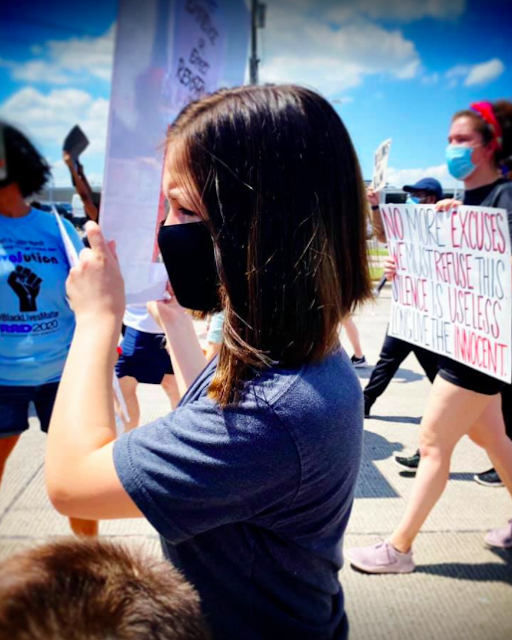 The other day, my husband and I went to the store to get some stuff for dinner. Trips to Kroger are the closest thing we have to date nights these days, so we usually take our time strolling down the aisles, enjoying some kid-free conversations.

On this particular day, however, we were only gone for about 30 minutes. When we returned home, we walked through the door to find our daughter, Eddie, curled up in my husband's chair with tears streaming down her face.

While I’ve been attending protests demanding justice for George Floyd the passed few weeks, even *I* haven’t been able to bring myself to watch the video.

I saw the images.

I read the commentary.

I knew what had happened, but I couldn’t watch a full 8 minutes and 46 seconds of a man’s slow, painful murder - his life literally being snuffed out on camera.

We sat down on the couch and I held Eddie as she told me what had happened through tears and sobs.

She was looking at a friend’s Instagram on our home computer. The friend posted a screenshot of a girl, around her age, in blackface. Her friend then followed it up with another link to the full video of George Floyd’s death to make a point about how vile this teens racism was.

So I sat with her in it.

That’s what these last few weeks of protests have taught me - how to simply sit with others in their pain, and then stand along side them and fight for change.

Being an activist myself, I know how important that righteous anger is.

It’s the flame that keeps us pushing forward, even when the future we‘re striving for seems damn near impossible - it’s always there to light the way.

I want my children to have that same fire in their belly for justice, but I also know from experience that we can’t live constantly ablaze, or we will burn out before we’ve had a chance to make a real difference.

Later that night, after Eddie’s tears had dried, she came and sat with me on the patio. I told her that I didn’t ever want her to forget how she felt when she saw that video... that I wished she hadn’t seen it... but since she had, I wanted her to lock that feeling deep inside her heart, because it would become invaluable to her one day.

Those feelings are what cultivate an activist spirit inside all of us. Spirits the world needs. That is what George Floyd’s legacy will be for so many people in this rising generation... no matter his past... he gave us ALL a mission for our collective future.

But that anger she‘s feeling right now? It needed to be addressed. It must be handled with care.

It can’t be accessed wantonly, because our rage is so powerful.

If we don’t train it, it will eat us alive.

...It will eat everyone involved alive.

That power must be harnessed, and controlled, and used wisely.

Because at the end of the day, that’s the caliber of outrage it’s going to take to tear down these oppressive systems. Systems that are so deeply rooted in our country that people literally think we’re ripping at the fabric of our flag when we try to tear them out.

But really we’re just fighting to create the very nation that flag claims to represent - one that stands for liberty and JUSTICE for all.

May we all be raising the activists our future needs right now.
Posted by Destiny at 2:37 PM