The Irony of "Life Threatening" Ailments...

As a mother of four I am constantly worried about my children. I have two boys and two girls, and with each of them comes a unique set of worries.

My oldest son for instance has terrible asthma. Cold weather always exacerbates this issue and at times his inhaler is a real life saver. It's so scary to watch his face as he gasps for air, hoping relief will come soon. He was born with this ailment and often the medication used to treat it is very pricey, costing upwards of $80 a pop. Because we're a family on a budget sometimes sacrifices must be made to get him the treatments he requires. But of course we make those sacrifices.

And well, my daughters I'm embarrassed to say, both have a condition called "Vagina." I myself suffer from Vagina, and used to worry that I had passed it on to them, although most medical professionals will refute that myth. But from what I hear (on feminasting.com) it is life threatening as well. See, Vagina is a serious disease that plagues 99.9% of all women... I threw in that decimal just to be safe. And because we were all born with this preexisting condition we are increasingly susceptible to a secondary disease called Heterosexual Coitus- commonly know as Sex. Sex frequently happens to Vagina sufferers, although it is not always fatal. However, a majority of the time it is elective. Heterosexual Coitus is usually something that those living with Vagina choose to contract unlike other ailments such as (the aforementioned) asthma, or cancer, or diabetes. Yet, due to increased pressure from extremist groups throughout (read as: a group of chicks in a basement... and Bill Maher) the federal government is planning on forcing insurance companies to cover the cost of birth control pills for women with Vagina.

Now as someone who herself lives with this condition, you might be surprised to hear that I do not support this mandate. Because the bottom line is that my son can't choose 'not to have asthma.' No, chronic inflammatory disease TRULY threatens his life, and honestly, I find it offensive that his medication is viewed as "optional" whereas chemical contraceptives are being considered a necessity by our federal government. They argue that "poor women cannot always afford birth control pills." Well, what about poor children with respiratory problems? Why won't the federal government force insurance companies to pay for their medication which is much, much pricier? What makes population control, er, I mean, contraception a priority? Never mind. I think I just answered my own question. 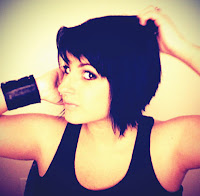 You just totally want to hear more about this whole SGK/PP thing, I can tell...

So..... I was uninsured for 4 years. Not because my husband and I didn't work, but because he worked hard, but for a small company with no benefits, and because I worked (hard) as a stay at home mom.

During that time I discovered an abnormality in my lady parts. I was convinced I had cervical cancer, but seeing as I had no insurance it would have been a luxury to verify my findings.

In this day and age, that was just insane to me. But going to an ER would've meant thousands of dollars of debt for my family and going to a OB would've amounted to about the same. I felt as though I had no other choice but to go to Planned Parenthood.

I imagine this is how many women feel.

However, when I considered the prospect of that, this is what I figured... the doctors at Planned Parenthood, the surgical ones at least which would've been the ones checking me out, were more than likely the same ones who provided abortions. So in turn, they were abortionists. And because I am strongly against abortion, in my opinion they were murderers. They stopped human life.

Now I don't know what others think of them... I'm sure many consider them heroes and wonderful people, but since I considered them murderers and nothing was going to change that, I was going to have to let someone who ended human lives put their hands on my body. Honestly, I could not see myself being able to remain composed enough for an exam, let alone any other type of procedure following that.

I know many people will think this is ridiculous, but it is what it is. For me, Planned Parenthood simply wasn't an option.... even though it was my only option.

And I hate that. I hate that PP was my only option. There's nothing pro-choice about having no choice at all when it comes to my health care. But that's precisely the way I felt.

As for the SGK issue, PP only offers manual breast exams NOT mammograms. Let's all go ahead and acknowledge that fact right up front. As far as I can tell, only ONE of their Texas offices (in Waco) even has the actual equipment required to provide thorough screenings.

So honestly, this has nothing to do with abortion or any of the other services they offer, it has to do with breast cancer screenings, and they fact that PP is not doing enough to adequately provide them.

Susan G. Komen stated as much just yesterday in a statement on their facebook page- 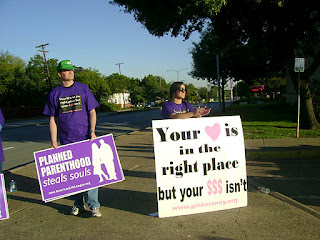 "At Susan G. Komen for the Cure, the women we serve are our highest priority in everything we do. Last year, we invested $93 million in community health programs, which included 700,000 mammograms. Additionally, we began an initiative to further strengthen our grants program to be even more outcomes-driven and to allow for even greater investments in programs that directly serve women. We also implemented more stringent eligibility and performance criteria to support these strategies. While it is regrettable when changes in priorities and policies affect any of our grantees, such as a longstanding partner like Planned Parenthood, we must continue to evolve to best meet the needs of the women we serve and most fully advance our mission."

This is a good thing. I promise. Women will benefit from these changes. Perhaps we will start getting a higher caliber of care, AND actually have a choice as to who provides it.

If we'd all inform ourselves more I think that fact would become even clearer. Women deserve better....and this provides us with much better choices in the long run. We have to stop letting Planned Parenthood monopolize our health care. We deserve options. This is ultimately the most pro-choice thing for women.

{UPDATE: Scratch that. Looks like we'll still have no choice. #komenforthecave}