So in true New Wave Feminists fashion, we’ve decided to enlighten our "white knight" on what these crosses actually represent...

They represent the 64% of women who attend post-abortion counseling each year and say they felt coerced into abortion by their partner, parent, or abuser.


They represent the women who were lied to and told that they’d be crushed by the financial responsibility of raising another child… when in reality there are so many local outreaches that strive to help women in unplanned pregnancies with:


-Housing
-Daycare
-Medical bills
-And so many more resources. All for free.

They represent the social justice warriors who convince women that without abortion they won’t be able to become politicians, or doctors, or innovators. Because nothing screams “feminism” like a man telling us what we CAN’T do, right ladies?

They represent a world that tells teenagers their lives will be destroyed if they have a baby at 17, 16, 15… that they can’t let their child live because they aren’t strong enough… instead of creating a culture that tells women THEY CAN….

They can have their child and finish school….

They can keep their baby and still reach their goals….

She can choose life at 16 and her future will hold so much more love and joy than she ever imagined.

Each cross represents a child that had to die because rather than eradicating poverty and hunger; we decided the poor are better off dead.


These crosses represent the women who were raped and then told that they couldn’t carry the “result of their assault” to term and that they must abort. They were the ones that no one bothered to empower with the truth that… This is YOUR CHILD TOO.

No, because instead of doing that people continue to use “rape arguments,” listen to that, “RAPE ARGUMENTS!” These women's worst nightmare has become nothing more than a talking point to promote your political agenda.

And so we are seldom able to hear, through all of the rhetoric, about the heroines who CHOSE LIFE ...and PS, they are disgusted by the way you use their stories to promote even more violence rather than celebrating their victory over their victimization.

These crosses represent the unborn men and women who unlike the amazing Rebecca Keissling’s and Ryan Bomberger’s of the world, were not allowed to live since we’re all still horrifyingly comfortable with this patriarchal construct that says because of their father’s transgressions it’s okay to callously refer to these HUMAN BEINGS as “rape babies,” and dispose of them like garbage. Victim blame much?

What if each one of these crosses represented a campus predator, an abusive boyfriend, or a flat out douchebag who knew that abortion was his best friend because it would allow him to use and exploit women for his pleasure without any consequences? Well, at least not for him…. Right?

But someone pays. And we, as females know, it’s always the unborn child and often the woman who has to live her whole life knowing that she bought into a lie that she couldn’t live her dreams without sacrificing her child’s life.

That’s bullshit and we’re not buying it anymore.

No one can force you to choose life just like no one should be able to force you to have an abortion. We just want you to know that we are here no matter what you decide with the support and resources you need.

To any students on campus who have had an abortion, this display was not done to hurt you, quite the opposite. We want you to know that we are here if you ever need to talk. You might not regret your abortion, but if you do come talk to us. No one should have to live a life filled with shame and guilt. We’re here to listen and get you help, no judgment. 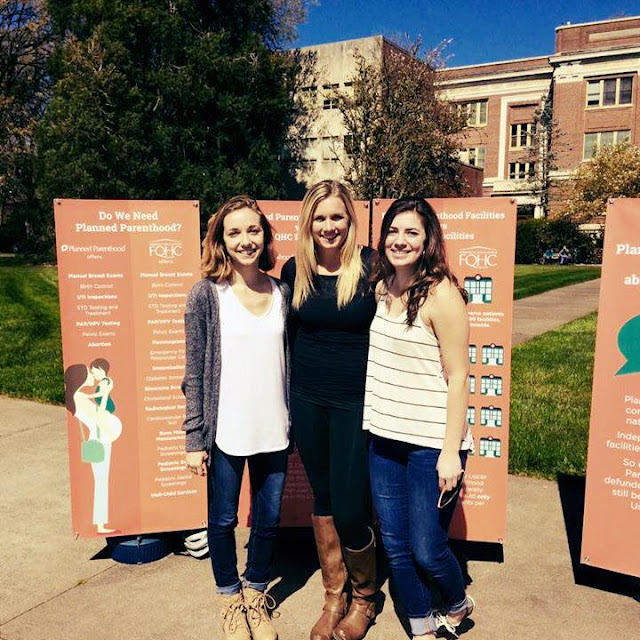 "Today while I was on campus with the ‪#‎WeDontNeedPP‬ Display, I met a student who told me she is scheduled to have an abortion on Saturday. We talked for awhile, and I asked why she decided to have an abortion. She told me she doesn't think she can finish school and be a mother. After sharing with her the myriad of resources available to pregnant and parenting students on campus, I looked her in the eyes and said, "You are strong enough to be a mother and finish your education, don't let anyone tell you that you aren't..." She burst into tears and thanked me for talking with her. I gave her my contact info and told her to let me know if there is anything that she needs." -Lisa Atkins

THAT is pro-life feminism.
Posted by Destiny at 9:02 AM 5 comments: