A few years ago a neighbor invited me to volunteer at something called a "Prostitute Round Up." The name, admittedly, is the worst, but the mission itself was focused on restorative justice.
The Dallas Police Department and a local church had teamed up to not just get women off the streets, but help them stay off the streets.
We arrived around 10 o'clock to an empty parking lot where three large trailers sat. I was told that the first trailer would be used as a holding cell for the women until they were able to see the judge. "Couldn't they just process them as they came in?" I naively thought.
I had no idea what I was about to see.
A little after midnight vice cops began showing up with the women in droves. They didn't look anything like I'd expected. These weren't the women portrayed on Law & Order SVU in tight mini dresses and 6-inches heels. Most of them were wearing baggy t-shirts and long blue jean shorts or sweatpants, their hair in messy ponytails, and quite a few were missing teeth. We were put to work making sandwiches because you could tell that many of them hadn't eaten in days.
This was not an empowered life choice they were making. These women were slaves to drug addiction.
One by one they were taken from the first trailer to the second one where they would see the judge for sentencing. This is where she would tell them that instead of going to jail they were going to be given a second option: treatment at a rehab facility which was being paid for by the church.
Almost all of the women chose to seek help, and that's when they started calling in the social workers.
It was like watching a relay race. The social worker would get the addresses from the officers and hurriedly rush off to collect the children who'd been left home unattended. Their ages ranged from teens all the way down to infants.
And that's when I stopped spouting the line that drugs and prostitution are "victimless crimes." They are anything but.
I never in a million years thought I would consider those children "lucky," but as The Dallas Morning News recently discovered, so many others never have a social worker show up at their door at all...
Read the full story here: https://interactives.dallasnews.com/2017/overlooked/
Posted by Destiny at 12:05 PM 2 comments:

The tides are turning...

Destiny here, reporting live from a bathroom stall at the LSU student center where I'm currently crying. BTW, I might be doing feminism wrong.

Sike. We're evidently doing it totally right, which is why I'm in this predicament. Allow me to explain....

So Aimee and her crew from Rehumanize International are tabling at LSU this morning and I got suckered into coming along. I say 'suckered' because I hate intentionally engaging people in this debate. I prefer a more organic app...roach usually involving booze. But, I digress. If anyone can do it right, it's Aimee.


She has this big banner that reads, "Can You Be Pro-Life and a Feminist?" which she posts up next to her table, and then she invites students walking by to log their vote on a poster board marked "YES" or "NO." 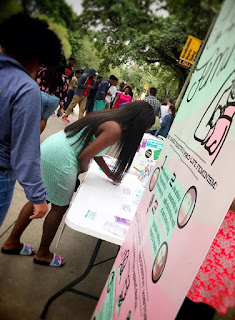 We'd been standing around for about 30 minutes when a bus full of college students pulled up, unloaded, and started walking towards us.

One by one a group of about 20 women took the time to cast their votes. Unanimously they said YES, you CAN BE prolife and a feminist. And now you're all caught up.

I had to walk away because we weren't trying to poll students on whether or not you could be a blubbering, middle-aged, purple haired, hormonal mess on a college campus. (That's really more of a "should you" vs a "can you" anyway.)

Bottom line, we started a national conversation in January with the Women's March and now at college campuses across this nation we're hearing the answer.

Yes, you can be prolife and a feminist. Yes, you can demand better for pregnant and parenting students on campus. Yes, you can keep your child and still succeed in life. Yes, women are finished with the lie that we must accept violence against the weakest and most vulnerable human beings - our own children - in order to achieve true liberation. Because we know, WE KNOW, authentic empowerment does not oppress others, it stands up and empowers them as well.

And we won't accept anything less.

Posted by Destiny at 9:22 AM No comments:

This morning I listened to a talk on the power of fatherhood.

I won't lie, it was hard to hear what the speaker was saying without feeling a bit defensive.

He began by citing statistics for children who are raised in homes without fathers and how they face higher rates of depression, drug use, incarceration, and academic failure.

He went on to say that adolescent females raised without fathers are more likely to fall into promiscuous lifestyles, and subsequent unplanned pregnancies.

He was describing me.

A self-proclaimed feminist. A feminist who was raised by an amazing, strong, hard-working mother... but no matter how hard she tried, she could never be my father.

And this might not be anyone else's experience, but it is mine.
I'm strong like my mother. I'm opinionated, and stubborn. But there's a part of me - and there probably always will be - that's broken because I never knew my real dad.

My mother took me to see him just once, thinking it might cause him to change his mind. I was two weeks old. He commented on how long my eyelashes were, then he never laid eyes on me again.
I wasn't enough... or maybe he wasn't enough. I really don't know. But for years I tried to reach out to him; my letters and phone calls always going unanswered.

So I looked for validation in others. Mostly guys. I told myself that this behavior was empowering. They wanted me.... someone wanted me, at least for a little while... and that felt powerful.
I would leave them before they could leave me, because that's what badass chicks did. Then I'd bask in how liberated and cool I was.

But at the end of the day it was my lack of self-worth, not empowerment, that led to those actions. And before I knew it, I was repeating my mother's life. Pregnant, single... having to be even stronger now that someone else would be depending on me, like I depended on her. So much of our strength came from their weakness.

I am a man-made feminist. And I hate that.

I hate that my strength often feels inauthentic because would I even be who I am today if so many men along the way hadn't failed me?
Perhaps I'll never know. But I do think this is what makes my mission with New Wave Feminists a bit different. I know that bad guys exist, but I haven't lost faith in the good ones. I understand the power of fatherhood because I've experienced the pain of its absence.

I've often said that when women are better, men are better. That is why NWF will never be about trashing males. It'll never be about embracing the toxic elements of radical feminism that tell us we don't need them, or that our power comes through controlling men with our sexuality. Because I've lived both of those lies, and I know better.

So to all the good guys, to all the men who are making this world and the women in it better through their love and support, Happy Father's Day.

What you are doing matters so much more than you know and the ripples of your impact on our lives will affect more generations than you will probably live to see.

As a side note, I found out two years ago that my biological father passed away. And while I'm sad that I never got to know him, he was the one who missed out. My children, his grandchildren, would've filled his life with so much joy.

So, if you're reading this and you have a son or daughter out there that you're afraid to reach out to because you're just not sure how they'll react, please don't let that fear stop you. I wish I could've told my father that. If you still have air in your lungs, it's not too late... 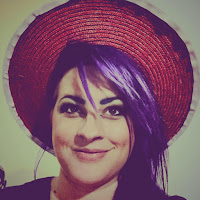