The Terrifying Tale Of The Big Bad Pig Patriarchy.... 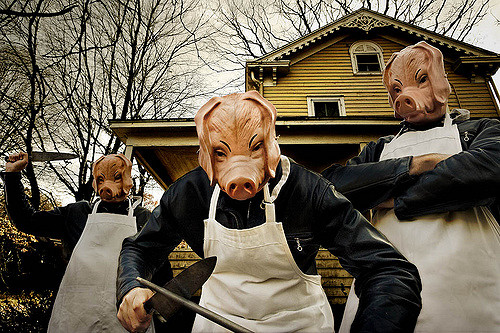 Once upon a time, women got wise to the ways of misogynist men and began standing up for their rights...

When the big bad pig patriarchy realized that this meant they could no longer abuse women and get sex out of them at will and that *gasp!* they would actually have to start respecting them as equal human beings, they knew something had to be done.
And quick!

So they came up with a plan...

They would convince women that consequence-free sex was what they actually wanted all along. After all, didn't they mention something about equality? So, if these men were pigs, then women should be able to be pigs too, right?!

To help the women on their journey to liberation, the pigs packed them a picnic basket with plenty of delicious little treats - like poisonous (shhhh!) birth control pills and the "right" to abortion. Then they convinced the women that their bodies were no longer private entities to be respected, but instead told them that if they were truly free, then their nipples should be too! Their bodies went on public displays for all the pigs to consume.

"Of course we 'respect' your sexuality," the misogynists would say with a chuckle as they watched the women strut about topless, ogling their boobs on street corners instead of in brothels. "You can sleep with me if you want and, get this, if you never want to see me again, well, that's just fine with me... your ‘liberation’ is my command!" they'd say. "Just reach into that picnic basket we packed for you and let me free you from the confines of this sexually oppressive society you've been trapped in for so long."

They added, "Oh! And don't worry, if an ‘accident’ happens and we procreate while engaging in this procreative act, you'll know what to do. After all, the basis for your empowerment is my, er, I mean your sexual freedom, right? And we can't just let some kid get in the way of you expressing yourself, can we? Of course not! ...I'd offer to pay for it, but you're an empowered, independent woman who makes her own money, so I know you won't need anything from me!"

And the women ate it up, making pigs of themselves because these lies tasted so good at first. The misogynist pigs used all the right words to make it sound extra tasty. And the next morning, after the pigs had gotten all they wanted out of the women, they moved on to their next sexual conquest. But not before telling the woman how empowered they were and leaving one more tiny jewelry-shaped gift at her door.

See, the women who decades ago had shaken off the shackles of bondage would now gleefully put them back on, all because the misogynists convinced them that the shackles were really bracelets.

Moral of the story: Don't convince yourself you've smashed the patriarchy, simply because it's wearing a different mask now.

*Please note that this story is not about all men. Only douchebag pigs,
or "the New Patriarchy" as we like to call them around here.

By Ashley Penn & Destiny Herndon-De La Rosa
Posted by Destiny at 9:36 AM 2 comments: