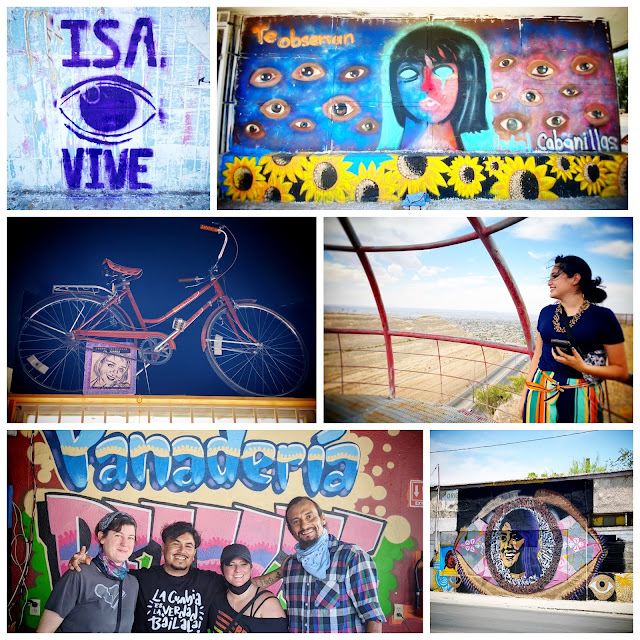 We got out of the car near where 16 de Septiembre meets Constitucion.
Her face was there. Painted on the wall nearby, her eyes a flat blue, and dozens of bodyless eyes were floating around her head. The words "te observan" were written at the top. "We're watching."
Karina told us it was a painting by Isabel Cabanillas, one of her best friends. She was an artist who worked as part of several collectives focused on protecting the women of Juarez. They worked tirelessly to counter the femicide that had taken root in their city over the last few decades. They also acted as guides to migrants, showing them to the places where they could access resources and safe lodging. She painted clothing to sell in order to raise money for them. She kept a neighborhood watch. She was doing the work.
And then, last January, Isabel was shot in the head and chest and left to die in the streets she fought to protect.
She became another pink rectangle with a black cross. A symbol that haunts their community and covers many of the telephone poles, signaling the spots where other woman were found dead.
The community that she worked so hard to protect was, and remains, rightfully outraged at her loss.
Marches were held.
Crowds of women shut down the Santa Fe bridge, under the shadow of another large cross with the toe tags of all of the murdered women.
They wrapped black bandannas around their faces and chanted "ni una mas." Not one more.
Across the street from "Te Observan" is a painting of Isabel. Purple hair, a big smile. At various spots around the area, purple stencils of an eye boxes in by the words "Isa Vive" can be found. Isa lives.
She is still doing the work. "They didn't kill all of us,” Karina, explained.
Forming a triangle with "Te Observan" and the painting of Isabel is ‘Panaderia Rezizte.’ The Resist Bakery.
In it 'Yorch' and his wife are baking bread. Gorgeous loaves and sweet buns made from recipes that were passed down from his grandfather. They sell the items they bake to raise money, and they donate fresh bread to migrant shelters. They were close friends with Isabel and the bike she was riding when she was killed is placed in a position of honor above the front door.
“You have to eat, right?" Yorch told us. "This is a basic need. So we’re making bread." The bakery has the electricity of big things packed into small spaces.
The day before we went to the intersection, a man named Omar picked us up from the border and we talked with Karina in his van while he purchased lumber to take to a build site. When we got there, we helped haul the lumber to the side of a small hut, where they were building lodging for migrant families waiting for their immigration court date.
Small children were patiently being shown how to add just the right amount of water to dusty clay in order to make adobe for the walls of the hut. Just before it was time for us to leave, they finally got to the part they'd been working for - the moment when they could take off their shoes and squish the water into the clay with their toes. The families who will live in that small home will probably never hear the laughter of the kids who helped build the walls that are surrounding them, but I hope they will feel it. It's not a mansion, it will not have air conditioning, memory foam mattresses, or cable television. But it will provide some measure of protection in a world full of agencies, weather, and human beings that almost always do not. It will give them a sense of home and dignity while they wait for their futures to unfold.
It's the communities of Juarez - Karina, Yorch, Omar, their families, and the hundreds of others using art, and bread, and mud, and sweat, and laughter to heal the brokenness of this world.
Isa vive. Isa lives.

~By NWF Board Member, Melissa Miles

Email ThisBlogThis!Share to TwitterShare to FacebookShare to Pinterest
Labels: CampaignRelief